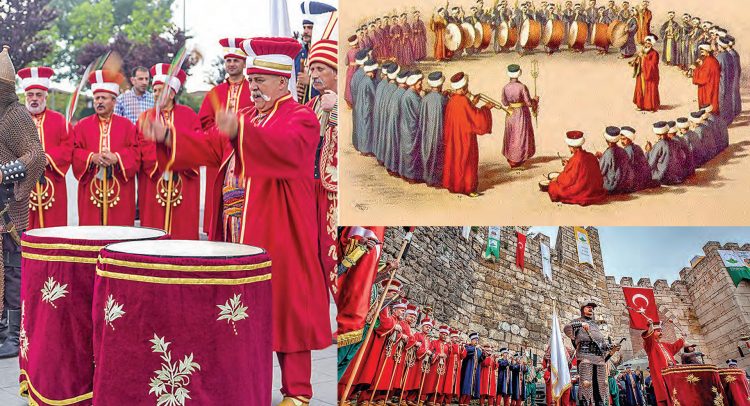 The military band within the Ottoman empire was an indication of sovereignty. The word mehter was used for band players and their music. The band would play a concert known as ‘nevbet ceremony’ at special times in the day for the sultan. In later periods, the Mehter would also play after afternoon prayers, at wedding ceremonies, after Bayram holidays and when there were victories. The band had initially originated when Seljuk Sultan Kayqubad III of Rum sent Osman Gazi, the Ottoman empire’s founder, a drum, flag and banner as an indicator of beylik’s monarchy. When the Mehter band was formed, the sultan would listen to their music during military expeditions as a way to pay Sultan Kayqubad homage. This tradition was later abandoned by Mehmed the Conqueror who had said: “It is no longer necessary to stand for a sultan who died 200 years ago”.

The main task of the Mehter military was to play music when preparing for war and while on the battlefield. The music emboldened soldiers to have strength and courage in battle while also inducing fear into the heart of enemies. When the Ottoman army travelled between towns in its territory, the Mehter would play to instill trust in citizens. However on enemy land, the band performed more intensely to the point where the mountains and plains would echo with the music with the aim of frighten the enemy before even encountering them. The music was partly composed of wind instruments including the boru, zurna, the mehter whistle and the kurrenay. It also included percussion instruments such as the drum, the kös, the çevgan, the zil and the nakkare.

After failing the second siege of Vienna in 1683, the music of the Mehters instilled less fear, and more curiosity among people in the West. Some elements of the music even went as far as to inspire western composers in the 17th century. The music that the likes of Mozart and Haydn produced, as influenced by Mehter music, came to be known as ‘alla Turca’ pieces. The Mehter music reformed much of Europe’s music, whose tunes were mostly made up of wind instruments.

In 1826, Sultan Mahmud II ended Mehter music in a bid to get rid of the Janissary Corps. However, in 1908 Ferik Ahmed Muhtar Pasa contributed in reviving the traditional music through founding the Imperial Military Museum. After being abolished again in 1935, the band was formed once more in 1952 at the Imperial Military Museum where today it now performs multiple times a week and at specific official ceremonies. The Mehter band marches with a distinguishing rhythm that goes along with the phrase, ‘Gracious God is good. God is compassionate’.

Australia has ‘deals’ for 150 million COVID-19 vaccines SO WHERE ARE THEY?