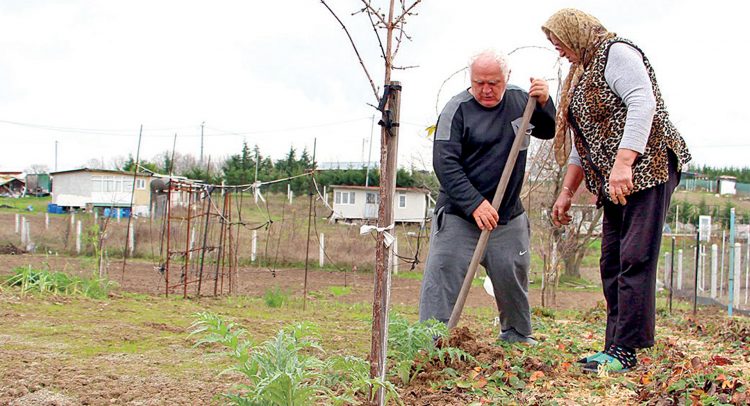 Spending the summer in a house with a courtyard, a vi­ew of the sea or in the lush countryside is the dream of millions confined to the hubbub of big city life.

With the coronavirus pande­mic taking its toll on Turkey, summer residences offer a perfect getaway to escape the crowds in cities.

Many popular resort towns, which have been almost deserted during the winter, have seen an unprecedented boom in population with people re­luctant to return home.

Silivri, a far-flung distri­ct of Istanbul better known as one of the rare agricul­tural hubs of this city of in­dustry and finance, is one of those popular spots.

Dot­ted with summer homes and with its proximity to central, more populated areas of Is­tanbul where summer hou­se owners reside, the dis­trict welcomes winter with a crowded population.

Ins­tead of a shorter commu­te to work, residents opt for a longer travel time, rat­her than risking themselves amid the crowds of Istanbul.

Yaşar Köse, the headman of Beyciler, a village so­me 32 kilometers (20 miles) away from central Silivri, sa­id the population has swel­led during the pandemic. “Most people are commu­ters. Their children, exten­ded families permanently stay here. As schools were closed, more people came to live here,” he told Anado­lu Agency (AA) on Sunday.

Mazlum Güçlü, headman of Gümüşyaka, one of the most popular summer residence destinations in Silivri, says school closures made more people extend their stay in the district. “People only le­ave for their homes in Istan­bul for work or some chores and return in the evening. Our population is normally some 9,000 people, but it is now around 20,000,” he said.

Cumhur Sağıroğlu is one of the thousands of peop­le who took shelter in Silivri, at his summer home. He ar­rived in May and has yet to return to his home in Esen­yurt district on the city’s Eu­ropean side. Sağıroğlu stays in Silivri with his wife and grandchildren and spends his days tending the small garden in front of his hou­se. “Many people in my ne­ighborhood in Esenyurt we­re infected with COVID-19, so I decided to stay here,” he said.