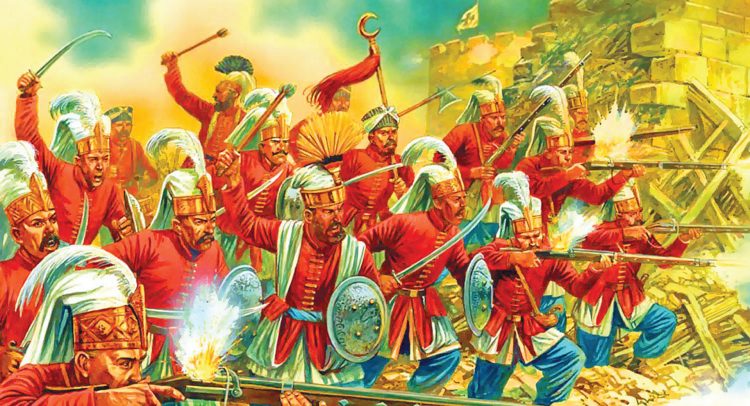 The Ottoman Military: The Janissaries

The Devlet-i Aliyye-i Osmâniyye, or more commonly known as the Ottoman Empire, was a great global empire that extended from Central Asia to Europe and Africa. It was one of the best empires while in its prime, operating on both a multinational and multilingual level. Known to be founded by Turkmen Osman I, the conquest of Byzantine and Eastern Romans lands was where the roots of the Ottoman military was formed. The Ottoman military was a strong front for the empire, and the reason for its ability to expand and thrive for centuries.

When planning for warfare, commanders would consult experienced soldiers, experts and even war records. Food and weapons were collected and shops were strategically planted along the campaign route, near villages who would provide live produce for the soldiers. This lightened the burden of carrying food and other necessities for the soldiers. Roads and bridges were even repaired and constructed to support the marching army, to make their journey easier and to accommodate the weapons they carried – especially cannons. The Ottomans were fiercely disciplined when camping and marching. Food rations were distributed frugally and soldiers implemented proper sanitation measures within the camps, maintaining cleanliness and hygiene. This helped with keeping diseases to a minimum within the army. Additionally, aggressive and rowdy behaviour was reduced due to prohibiting alcohol consumption.

The emergence of one of the strongest assets of the military corps came about from ex- Christian converts who were captured at a young age to serve sultans for life. These people were known as Janissaries, a word derived from the Turkish language meaning yeniçeri or ‘new soldier’.

The tradition of turning captured prisoners into Muslim soldiers was born out of the Balkans conquest where the Turks took a percentage of male children from the Christian population. Unlike their Christian counterparts, the Ottomans believed that executing prisoners was a waste of manpower. These children became more than ‘slaves’ of the Sultan; they became an elite fraction of both Ottoman society and military. The smartest out of these warriors were the iç oğlani who trained for several years in palace schools, learning leadership, athletic and military prowess, languages, science, religion and a creative art of the student’s choosing. The rest were given a military education before joining the Janissary corps. They were recognised as the most effective and best trained soldiers of Europe in the 15th and 16th centuries. Having no attachments, the Janissaries were easily loyal to the sultan. With the implementation of the Janissaries, the earlier Ottoman sultans had effective control and power over the empire. This was until the slow but sure forces of corruption made its way into politics from the military. One method that the Janissaries acquired political power was through their close affiliation with the Bektash Dervishes, who had close ties in the Janissary corps through colonel powers. Thus with the decreasing power of the sultans, more privileges were granted to the Janissaries. In the last quarter of the 17th century, the Janissaries were no longer recruited from Christian backgrounds; Turks started offering their own children in the hopes of giving them a better education and life.